The Past Within – Devlog 6 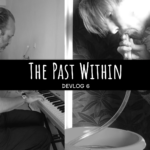 The Past Within – Devlog 6

It’s been a while since we updated you all on the progress on The Past Within.. mainly due to us being really busy with implementing all the improvements we noted after showcasing our first beta version at Indie Showcase. Later in this devlog we will explain more about where the project is now as well as more about the Q2 release window. But first, we will get more into something that was quite a big deal for us development-wise in the last couple of months: Music and Sound Design.

Music and sound design have always been a big part of the Rusty Lake experience and our co-op adventure The Past Within is no exception. Only this time we need to keep in mind that two people are playing (and at the same time communicating) on two different devices in two different environments (2D and 3D). As you probably can imagine after reading the last sentence, this brings some complications and difficulties with both music and sound design, especially since you need to hear what your partner is saying to you. As with all the other hurdles for The Past Within this was again a long, yet exciting, process, but the team managed it masterfully (if we may be so humble). Over the last couple of weeks, it has been such a joy to playtest the full game with both music and sound design. And while we are busy mixing all the audio, we would like to share more about this important part of the game!

From the very start, Victor Butzelaar was, as he’s always been about our projects, very excited to compose new tracks for our two-player adventure. While being on the sideline for a long time (we had some other troubles to deal with first), he couldn’t wait to begin composing for The Past Within. After his amazing theme songs for both the teaser and official trailer, he was eager to work on the background tracks for the actual game. As mentioned, players are in different environments and while everyone is used to playing the classical 2d rooms, the 3d environment is completely new and requires a different atmosphere. Designing a background music track for that environment was a challenge. But not as big a challenge as some (physical) unlucky injuries Victor experienced. He had to recover for months and was not able to go to the office, so we brought his piano to his home and he was able to compose all the required tracks just in time. He has always been a rockstar to us, but now even more so… Here is a little clip he wanted to share with you all, containing a track that might sound familiar:

Regarding the sound design, we also wanted to take this project to new heights. Interacting with a 3D cube requires a sound design that fits perfectly.. and for the first time ever we also wanted to give the reins of the sound design for the classical 2D room to someone with a fresh perspective. Luckily we got in touch with a team that was more than happy to take on this challenge: Jorick and Giliam from Driftwood audio. They both already had experience making sound designs for real-life escape rooms so they knew what they had to work with, plus… they are both big Twin Peaks fans. After the first test session between the two, they were impatient to create more than 200 unique sounds you will be hearing in The Past Within. This process is amazingly time-consuming but regardless, they simply nailed it. The sound design feels fresh and also for the 2D environment it feels like a big step forward. Here is a little sneak peek of the sounds they are creating. We hope to share even more in-depth footage of their creative process after the game releases!

Where is the project now ⌛

We are aware that we are reaching the end of Q2 and many of you are wondering what the release date would be. June just started and we are now certain that we will not make our (own) deadline which we communicated (and made you excited for).

We are truly sorry for that!

The delay has several reasons:

For the first time ever a Rusty Lake game is now completely built into Unity. From the end of last year, we could finally start working on implementing this transition and it took months of hard work from our Unity team: Luuk and Martijn. They had the challenge to make the Flash to Unity transition work in such a way, you won’t notice a difference from our previous games. Thanks to their incredible job we achieved this big milestone in the first week of May, so now we can finally say that the whole game runs smoothly in Unity. But reaching this milestone also showed the difficulties we still had to face with this project: not all the graphics/animations worked as they normally would work, the performance was not as great, the battery on mobile devices was draining too fast and the fact that the game has to be played cross-device brought new challenges in Unity. Basically, after 7 years of experience with Flash projects in which we could predict how they would be performing on different devices, we were now starting from scratch in Unity.

And this is just one part of the project’s puzzle (yes, we also like to puzzle!); because after the latest event we attended and partly organized through Second Maze (Indie Showcase), the list of feedback and improvements seemed endless and we are still working on it while writing this. Next to this we’re also working on mixing the final audio, implementing a new save system, adding achievements and we want to start with the first translations soon…

We hope this gives some insights into the current processes and we hope you understand we cannot disclose a new (clear) date with you yet. At this point, we just want to work through our massive list of improvements without losing any focus – and at the same time also trying to maintain a healthy work environment. We don’t want to make any false promises, besides saying it will take a few more months. Around mid-July, we have another showcase event (and deadline) and we hope to have a clearer picture of the release window, which we can hopefully share with you all if we are confident we can make it!

Again we are sorry that it takes so long and we want to thank you again for your patience! As you can read in all our devlogs, it is a project that asked a lot from us, so we better make it  worth the wait with the quality you would expect from us. Stay tuned, as always!

Ps. We kindly ask you to look at our roadmap again, there is more coming – and sooner than you think 🙏

Plus a quick reminder that you can still play The Past Within Demo on Steam here!