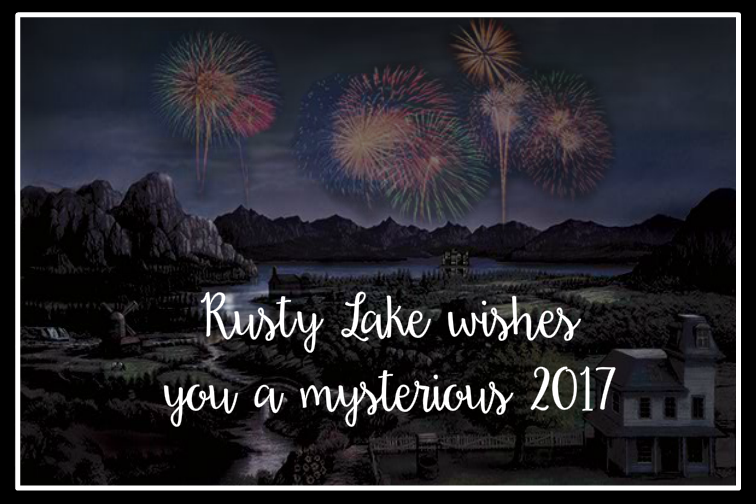 While preparing all the New Year cards for the winners of the #rustylakechristmas contest, we thought why not look back on past years work and sharing the plans for 2017!

2016 was an amazing year for Rusty Lake. First of all let’s make a small overview of the game development part. After launching Rusty Lake Hotel in December 2015 we immediately starting working on Cube Escape: Birthday. Dale’s childhood in combination of a blue cube was on our mind for a long time. We got a lot of inspiration for this project and had a lot of fun developing it. The game was launched in February and got one million plays within a month. A new milestone. Almost 2 months later we launched the eight installment of the series: Cube Escape: Theatre. Fitting Dale’s learning process in a David Lynch setting was quite a challenge, but we were very happy with the outcome making it one of the atmospheric Cube Escape yet. In april the long development of our second premium game began. Rusty Lake: Roots started with a small idea about a Family Tree, it turned out to be the biggest project so far. It felt we were brainstorming all the time. We had so many ideas for the divergent characters within various situations, the story line and changing up the gameplay. In the end we are very proud we managed to make this with just the two of us in 6 months. Of course we also need to mention the great help and effort from Victor Butzelaar, Bob Rafferty, Johan Scherft, all 12 translators and beta test players. We’re still writing a background story on this development process, so stay tuned.

Beside the development of games it is important to let the world know about the existence of Rusty Lake. We found out that being present on conferences and do a lot of networking helped a lot. On those conferences you meet a lot of people from the industry; fellow developers, press, ad agencies and so on. Above all it’s awesome to meet fans who actually know your games and keep the booth occupied for hours to playtest your new game(s).

Here is a little sum up of the 5 conferences we have been this year: Casual Connect Amsterdam where Rusty Lake Hotel got nominated twice (Best Mobile Game and Best Narrative), Gamescom in Cologne where we showcased Roots for the first time and met a lot of people from the industry, Tokyo Game Show in Japan, amazing event where we let people playtest a final beta version of Roots… and last but not least winning the prize (our first prize!!) for best Narrative for Rusty Lake: Roots at Casual Connect Tel Aviv.

So what does 2017 has in store for Rusty Lake… of course we need to finish the ninth installment of the Cube Escape series. At the moment we are still working on it, finalizing all puzzles and story parts. We hope to show you a preview really soon 🙂 We also want to mention we are really glad that we will continue working with Victor, Bob and Johan (a new painting is in progress) for this new Cube Escape.

Here is a shortlist for our other plans:
– The tenth and final Cube Escape
– A collaboration game with other developers and artists
– A new premium game
– The base of a new series in Rusty Lake
– Merchandising (We are finalizing the poster atm).
– An animated video for our youtube channel
– A new website for rustylake.com will be live in January: more updates, more content (blogs and games) and a merchandising store.
– More contests and more interaction with fans
– Showcasing on conferences worldwide (America/Asia)

This year our fan base also grew tremendously. At one point people on Facebook were saying I knew when this page had still 500 likes and I felt special. For us it’s just amazing to see that the support is growing so rapidly! We will do our best to let you feel special the same it was back then. For example making the postcards as we speak, asking you questions, involving you into out projects. Also we still reply to everyone who sends us a private message. It takes a lot of time but in the end it’s worth, because you make Rusty Lake what it is today. Also it is just amazing to see how creative you guys are, from a harvey Tattoo, all the artwork we receive, the cosplayers till a gingerbread house of Roots.. it just blows our mind every time.

Thanks a lot for all the support guys! We can’t wait to show you what Rusty Lake has to offer next. We wish you a mysterious 2017!

Ps. all contest winners will receive a varation of this card, with a little secret on it 🙂