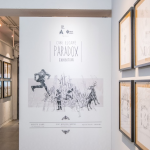 A few years ago fanartist Lau Kwong Shing (@cowcowtony) made a 16-pages comic version of Roots, we were amazed by its quality and this piece eventually lead to the Paradox Comic book, which just released today on his first comic exhibition in Hong Kong! ⁣⁣⁣


⁣⁣
The idea for a comic version of Paradox came to mind when we started making the game-movie crossover. Lau really liked the idea and made us even more excited with his first sketches. Now, six months later we can hold the very first Rusty Lake comic – a 90+ pages beautifully illustrated comic version of Paradox, printed with the highest quality possible by @zbfghk – and all we can say is that we are incredibly proud and honored to be part of Lau’s journey as an artist and having our own comic set in the Rusty Lake universe.⁣⁣⁣
⁣⁣⁣
We would like to celebrate this special moment by giving away 3 limited editions of the Paradox comic book: share your own little Rusty Lake story in less than 300 words (can be anything: poems, short stories, comics, fanart with additional text) to contest@rustylake.com. Winners will be announced on the 11th of May, the day we will start the online sale of the book (16:00). Who knows where your story or fanart will end 🙂 ⁣
⁣
Ps. Special thanks to @gallery_z_hk for hosting the event and @zbfghk for helping organizing! The exhibition is still open for two weeks!